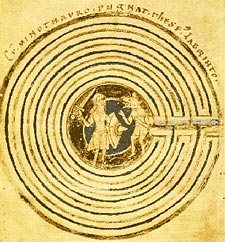 image:  The Otfrid labyrinth design, here the scene for the battle between Theseus and the Minotaur, in a late twelfth century manuscript from Regensburg, Germany.

Ten thousand collective steps
have gotten us to right here,
twisting and turning, each with,
moment by moment, myriad
steps of thinking, feeling,
receiving, transmitting, yet
within a context of one-way-in
one-way-out, as prescribed.
When will we reach the center
so we can step our ways back
to the beginning of things?

Labyrinths have fascinated me for quite awhile. A traveling Medieval/Chartres-style labyrinth, printed on a giant piece of vinyl/canvas/plastic (forgot now) was laid on the floor of the local community college gymnasium. Flowers, candles, and drummers outside of the circle did a wonderful job of calling in the spirits as one-by-one, with spaces in between walkers, we entered the labyrinth. I’ve been walking them ever since, all Medieval-style so far, trying to recapture the magic of that first experience. My opinion is that it’s better as a group, with the proper cultivation of calling the spirits in to join with the walkers.

The following comes from the World-Wide Labyrinth Locator website, which I would heartily encourage anyone who is interested in labyrinths to check out.

As our awareness of labyrinths expands, it becomes more and more important to keep our terminology consistent. … With this in mind, Jeff Saward and Sig Lonegren — with help from Alex Champion, Robert Ferré, Adrian Fisher, John Kraft and many others — have worked together over the years to create a classification of labyrinths…

Existing for at least 3500 years, the archetypal labyrinth design consists of a single pathway that loops back and forth to form seven circuits, bounded by eight walls, surrounding the central goal. It is found in both circular and square forms. There are sub-categories of Baltic, Chakra Vyuha, seed patterns, Otfrid. The Otfrid was an important though short-lived labyrinth variety, the Otfrid is based on the classical seed pattern, but is drawn concentrically with an additional set of turns added to create an eleven-circuit labyrinth. First found in Christian manuscripts from the mid-ninth century CE, it probably provided the impetus for the development of the much more influential medieval design.

Other major classifications detailed at the site are Roman, Medieval, Contemporary, and Mazes.

–From the World-Wide Labyrinth Locator website, but taken from the text © Jeff Saward 2003 from Jeff’s study of historical labyrinths and mazes, published in the UK as Labyrinths & Mazes: The Definitive Guide to Ancient & Modern Traditions by Gaia Books, London, 2003.

The site is also home to The Labyrinth Society

Ingrid is today’s host for earthweal‘s weekly challenge.  Ingrid says:
For this week’s challenge, let’s examine the possibility of rhyming, or perhaps even dancing our way out of the Anthropocene labyrinth.