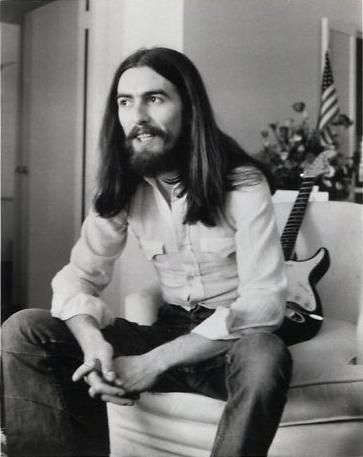 For me, today’s pick was down to two of my most favorite top 10 George Harrison tunes, this one and “Savoy Truffle.” Both of them are simultaneously silly songs and pivotal turning points for George’s life and musical career. Tossing a coin, “Wah-Wah” won out. I know at least a few people in the song draft are well-versed in the pedigree and history surrounding the song. For those readers who aren’t I would heartily encourage you to check out the plentiful info on it at wikipedia and probably a million other sources on the internet. To me, “Wah-Wah” was George’s declaration of Independence from The Beatles’ Way of doing business. It’s like he’s saying, thanks for what you’ve done for me, but it’s time to move on.

“Wah-Wah” is the third cut on side one of the six-sided, “All Things Must Pass,” released by George Harrison in November of 1970.

Recorded shortly after the Beatles’ break-up in 1970, “Wah-Wah” was the first track taped for All Things Must Pass. The recording features a dense production treatment from Phil Spector and backing from a large cast of musicians including Eric Clapton, Ringo Starr, Billy Preston, Bobby Keys and the band Badfinger. On release, Rolling Stone magazine described it as “a grand cacophony of sound in which horns sound like guitars and vice versa.” While several reviewers find the heavy production appropriate for the song, Harrison considered the recording overproduced and the sound too cluttered.

“Wah-Wah” was the first song Harrison played live as a solo artist when he performed it as his opener for the Western-music portion of the Concert for Bangladesh, in August 1971. Viewed by some commentators as superior to the studio recording, this version re-created Spector’s Wall of Sound treatment in a live setting, using many of the participants from the 1970 album sessions. At the Concert for George in November 2002, a year after Harrison’s death, “Wah-Wah” was performed by an all-star band that included Clapton, Jeff Lynne, Starr and McCartney.

More recently, George’s son, Dhani, put on, “George Fest: A Night to Celebrate the Music of George Harrison” in 2016, where Nick Valensi of The Strokes and a first-class backup band performed the song in ecstatic supremeness. I’m sure Geo was pleased by how Dhani pulled this group of musicians together to honor his music.

I’m in agreement with the reviewers in that Spector’s lush production was appropriate for the song. It’s as complex and tasty as a stew that’s been simmered all day with seasonings, put in the fridge overnight for the flavors to merry, and heated up the next day and served with still-warm sourdough bread. I could listen to, “Wah-Wah” on repeat and never grow tired of it. Geo may not have intended it as such, but I also like to listen to it as if it were a song between old lovers that have shared unforgettable memories with each other.

I’m including the studio version video with my post, but you can find the Bangladesh, Concert for George, and George Fest versions by clicking on the names in this sentence. I’m also really looking forward to reading thoughts and comments from others on this gem of a song.

Wah-wah
You’ve given me a wah-wah
And I’m thinking of you
And all the things that we used to do
Wah-wah, wah-wah

Wah-wah
You made me such a big star
Being there at the right time
Cheaper than a dime
Wah-wah, you’ve given me your wah-wah, wah-wah

Oh, you don’t see me crying
Hey baby, you don’t hear me sighing
Oh, no no-no no