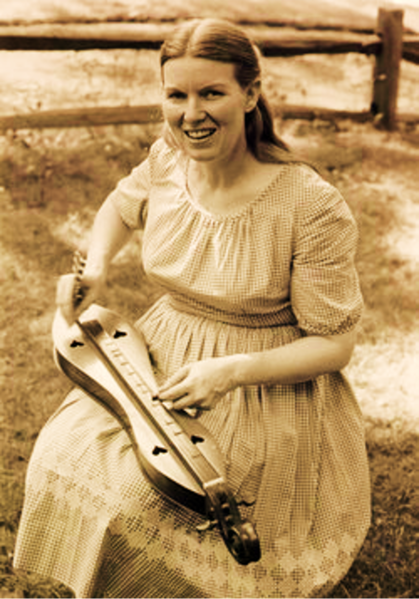 Jean Ruth Ritchie (December 8, 1922 – June 1, 2015) was an American folk singer, songwriter, and Appalachian dulcimer player, called by some the “Mother of Folk”. In her youth she learned hundreds of folk songs in the traditional way (orally, from her family and community), many of which were Appalachian variants of centuries old British and Irish songs, including dozens of Child Ballads. In adulthood, she shared these songs with wide audiences, as well as writing some of her own songs using traditional foundations. She is ultimately responsible for the revival of the Appalachian dulcimer, the traditional instrument of her community, which she popularized by playing the instrument on her albums and writing tutorial books. She inspired a wide array of musicians, including Bob Dylan, Joan Baez, Shirley Collins, Joni Mitchell, Emmylou Harris and Judy Collins.

Ritchie was married to photographer George Pickow from 1950 until his death in 2010, with whom she had two sons, Peter (1954-) and Jonathan (1958-2020). She lived in Port Washington, New York, and was inducted into the Long Island Music Hall of Fame in 2008. In early December 2009, Ritchie was hospitalized after suffering a stroke which impaired her ability to communicate. She recovered to some degree then returned to her home in Berea, Kentucky. A friend reported on her 90th birthday, “Jean has been living quietly in Berea for the last few years, in good spirits and well cared for by neighbors and family.” She died at home in Berea on June 1, 2015, aged 92.

One thing to share:
In 1952, Ritchie was awarded a Fulbright scholarship to trace the links between American ballads and the songs from England, Scotland and Ireland. As a song-collector, she began by setting down the 300 songs that she already knew from her mother’s knee. Ritchie and her husband George Pickow spent 18 months tape recording, interviewing and photographing singers, including Elizabeth Cronin, Tommy and Sarah Makem, Leo Rowsome, and Seamus Ennis in Ireland, Jeannie Robertson and Jimmy MacBeath in Scotland, and Harry Cox and Bob Roberts in England. When people asked what sort of songs they were looking for, Ritchie would sometimes ask them if they knew Barbara Allen and sing a few verses for them. In 1954, Ritchie released some of the British and Irish recordings on the album Field Trip, side by side with Ritchie family versions of the same songs; a broader selection was issued by Folkways on the two LPs Field Trip–England (1959) and As I Roved Out (Field Trip–Ireland) (1960). Some transcriptions and photographs were later published in Ritchie’s book From Fair to Fair: Folksongs of the British Isles (1966).

Official website: no official one but there is a Library of Congress site with great info here