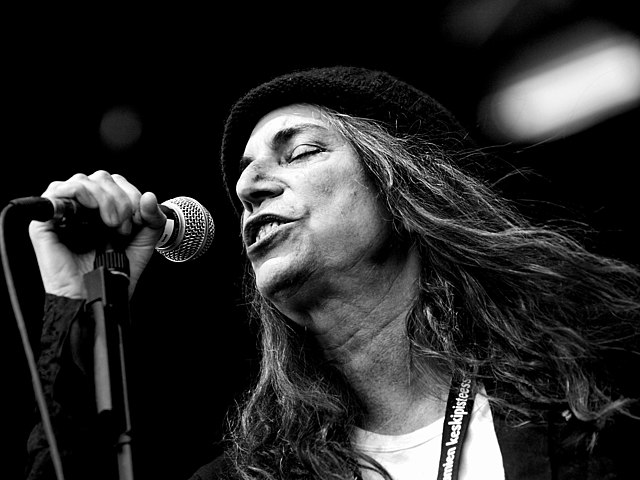 Patricia Lee Smith (b. 12/30/46) is an American singer-songwriter, musician, author, and poet who became an influential component of the New York City punk rock movement with her 1975 debut album Horses.

Called the “punk poet laureate”, Smith fused rock and poetry in her work. Her most widely known song is “Because the Night“, which was co-written with Bruce Springsteen. It reached number 13 on the Billboard Hot 100 chart in 1978 and number five in the U.K.

In 2005, Smith was named a Commander of the Ordre des Arts et des Lettres by the French Ministry of Culture. In 2007, she was inducted into the Rock and Roll Hall of Fame. She placed 47th in Rolling Stone magazine’s list of 100 Greatest Artists published in December 2010.

Discography and Bibliography:
Studio albums: 11
Book/poem titles: 25
There are also no less than 8 books written by others about Patti.

Some things to share:
Patti was born at Grant Hospital of Chicago in Chicago to Beverly Smith, a jazz singer turned waitress, and Grant Smith, a machinist at a Honeywell plant. The family was of part Irish ancestry and Patti was the eldest of four children, with siblings Linda, Kimberly, and Todd. When Smith was 4, the family moved from Chicago to Germantown, Philadelphia, before heading to … New Jersey.

At this early age Smith was exposed to her first records, including Shrimp Boats by Harry Belafonte, Patience and Prudence’s The Money Tree, and Another Side of Bob Dylan, which her mother gave to her. Smith graduated from Deptford Township High School in 1964 and went to work in a factory. She gave birth to her first child, a daughter, on April 26, 1967, and placed her for adoption.

On November 17, 2010, Smith won the National Book Award for her memoir Just Kids, a memoir of her time in 1970s Manhattan and her relationship with Robert Mapplethorpe. The book is reported to have fulfilled a promise she had made to Robert to write.

In 2015, Adult Swim offered Smith the opportunity to perform a song to commemorate the series finale of Aqua Teen Hunger Force. Smith, an avowed fan of the series, recorded the song “Aqua Teen Dream” with the help of her children and band. The vocal track was recorded in a hotel overlooking Lerici’s Bay of Poets.

Looking for a youtube I came across this one just done as a Benefit for Ukraine.  Patti sings with Eugene Hutz, who I recognized from, “Everything is Illuminated,” a movie I just reviewed last week in Movies, Movies, Movies!, which is set in Ukraine.

Source: wikipedia where there is a BUNCH of additional information about Patti’s musical and poetic excellence and the influence she has had in the world of music.