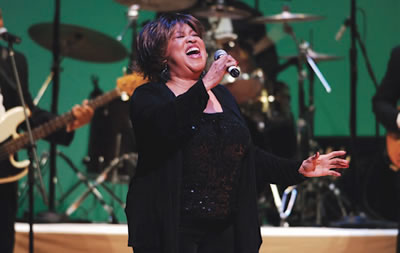 Staples was born in Chicago, Illinois, on July 10, 1939. She began her career with her family group in 1950. Initially singing locally at churches and appearing on a weekly radio show, the Staples scored a hit in 1956 with “Uncloudy Day” for the Vee-Jay label. When Mavis graduated from what is now Paul Robeson High School in 1957, The Staple Singers took their music on the road. Led by family patriarch Roebuck “Pops” Staples on guitar and including the voices of Mavis and her siblings Cleotha, Yvonne, and Pervis, the Staples were called “God’s Greatest Hitmakers”.

She has recorded and performed with her family’s band The Staple Singers and also as a solo artist.

Staples was inducted into the Rock and Roll Hall of Fame in 1999 and the Blues Hall of Fame in 2017. She has been nominated and/or won no less than 21 major music awards.

Mavis has also appeared in many films and television shows.

Some things to share:
Mavis has continued to be a human dynamo and is still going strong. Just a few recent performances in the past 5 years:

In January 2017, Staples was featured as a guest vocalist on “I Give You Power”, a single from Arcade Fire benefiting the American Civil Liberties Union. In February 2017, Staples appeared on NPR’s Wait, Wait … Don’t Tell Me! in the “Not My Job” segment, answering questions about the rock band The Shaggs. In April 2017, “Let Me Out”, a single from the fifth studio album by Gorillaz, Humanz, was released, featuring Staples and rapper Pusha T. Staples’ sixteenth album If All I Was Was Black was released on November 17, 2017. The record was again produced by Jeff Tweedy and contains all original songs cowritten by Mavis and Tweedy. Following the release, Staples toured with Bob Dylan. She also appeared on the 2017/18 Hootenanny. In 2018, she sang on Hozier’s single “Nina Cried Power“. In May 2019, Staples celebrated her 80th birthday with a concert at the Apollo Theater, 63 years after first appearing at the theater as a teenager with her family band, the Staple Singers, in 1956. The show, which featured special guest artists, including David Byrne and Norah Jones, is one of a series of collaborative concerts she staged in May to commemorate her 80th birthday. She also performed at the 2019 Glastonbury Festival. On June 3, 2020, Staples collaborated on the track ‘pulling the pin‘ with Run The Jewels (and Josh Homme) on their fourth studio album RTJ4.

Source: wikipedia which has a wealth of information about Ms. Mavis Staples, Living Legend