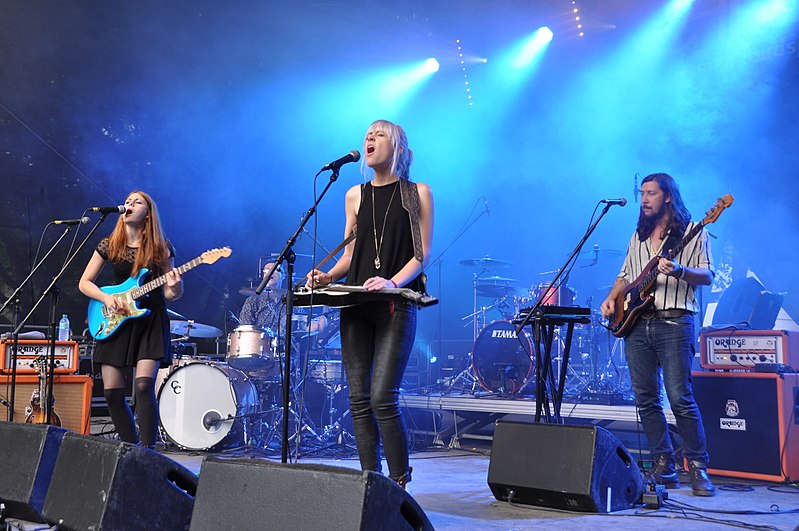 Larkin Poe, performing at the 1st Blacksheep Festival in the castle yard / castle park of Bad Rappenau-Bonfeld (Germany) in 2014.  photo by Rs-foto

Music is a bridge that can connect generations across time. In recording KINDRED SPIRITS, our admiration for the artists who originally wrote and performed these songs blossomed into an even deeper reverence. Coming up in a family of music lovers, a lot of the songs have been with us since childhood; in 2015, we started a YouTube series dedicated to paying tribute to our musical heroes that unexpectedly took off and when fans began requesting recorded versions of the songs, we began daydreaming about how an interpretive album might take shape. Bringing these old friends into the studio, stripping them to the bones and recording them live and raw, felt like a ritual.
– Megan and Rebecca Lovell

Larkin Poe is an American roots rock band originally from north Georgia, currently based in Nashville, Tennessee, and fronted by sisters Megan Lovell (b. 5/12/89) and Rebecca Lovell (b. 1/30/91.) Featuring strong southern harmonies, heavy electric guitar riffs, and slide guitar, they are often touted as “the little sisters of the Allman Brothers.” The band performed at the 2014 and 2016 Glastonbury Festival and were voted “Best Discovery of Glastonbury 2014” by the UK’s The Observer. The sisters have also toured as backing musicians for a variety of other bands, most notably Elvis Costello, Conor Oberst of Bright Eyes, Kristian Bush of Sugarland, and Keith Urban.

Rebecca and Megan Lovell began their musical careers in 2005 as teenagers with the formation of a bluegrass/Americana group, the Lovell Sisters, with their older sister, Jessica Lovell. After self-releasing two independent albums and touring successfully for four years – appearing on Garrison Keillor’s A Prairie Home Companion, the Grand Ole Opry, and performing at Bonnaroo Music Festival – the Lovell Sisters announced the group’s disbandment in December 2009. In January 2010, Rebecca and Megan regrouped as Larkin Poe.