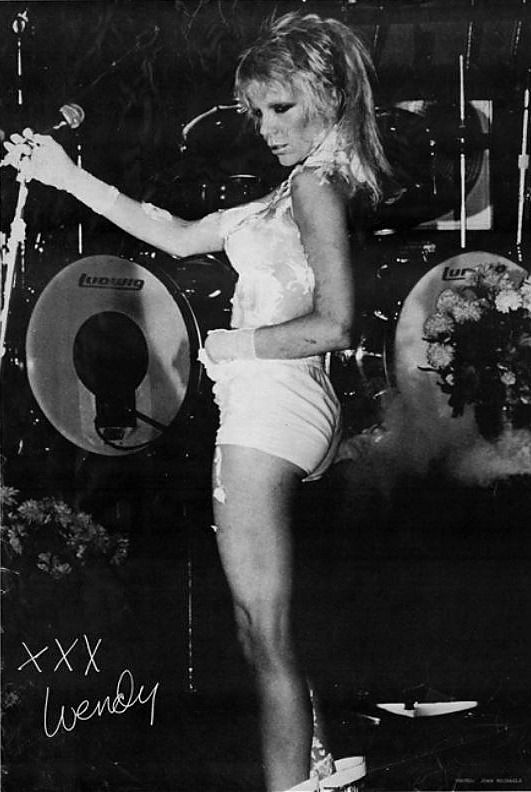 Thank you to whomever suggested Wendy O. Williams to me last year to feature this year’s in Women Music March!

Wendy Orlean Williams (b. 5/28/49 – d. 4/6/98) was an American singer, songwriter, and actress. Born in Webster, New York, she came to prominence as the lead singer of the punk rock band Plasmatics. She was noted for her onstage theatrics which included partial nudity, exploding equipment, firing a shotgun, and chainsawing guitars. Performing her own stunts in videos, she often sported a mohawk hairstyle. In 1985, during the height of her popularity as a solo artist, she was nominated for a Grammy Award for Best Female Rock Vocal Performance.

Three albums with Plasmatics later, Williams embarked on a solo career and released her debut album, WOW, in 1984. Albums Kommander of Kaos (1986) and Deffest! and Baddest! (1988) followed, before her retirement from the music industry. Williams made her non-adult screen debut in Tom DeSimone’s film Reform School Girls (1986), for which she recorded the title song. She also appeared in the 1989 comedy Pucker Up and Bark Like a Dog, television series The New Adventures of Beans Baxter, and MacGyver.

Discography and Filmography:
With the Plasmatics = 6
With Wendy O. Williams Band = 5

Some things to share:
A committed vegetarian since 1966 until her death, Williams believed in leading a healthy lifestyle and aiming for self-improvement. She was once featured on the cover of the Vegetarian Times. In her later years, she gave up smoking (which she felt very strongly about and would not allow anyone to smoke in her changing rooms) as well as eventually stopping drinking entirely and never using any other drugs; she also became strongly opposed to the high sugar content in easily available processed foods. Swenson recalls that: “[Wendy] was a consummate professional, always working on her craft, working on the show. She would work out hours every day, she would run six miles a day. She was a total vegetarian, totally into health food. When we were on the road, she always made sure the band was well fed. No processed meats, no white bread”. She was known for refusing to wear makeup products manufactured by companies that used animals for laboratory experimentation and she was completely against needless poaching. After leaving the music scene, Swenson and Williams moved to Storrs, Connecticut, in 1991 to live in the geodesic dome house that they built for each other. Wendy worked at a food co-op and became a wildlife rehabilitator to help animals, which she loved since her childhood as she was known for taking in and helping wounded wild animals as a child.

On April 6, 1998, Williams shot herself near her home in Storrs, Connecticut. She had attempted to kill herself twice in the years leading up to her death.

I noticed that a lot of the material in wikipedia about Wendy’s death is secondhand information through her partner and so, as far as I am concerned it is unconfirmed and makes me more than a little suspicious!  It would take a lot more research than I have time to do to try and sort it out, so putting this short note in here in lieu of.  Feel free to do any research you want to do and share it please in the comments anything you find.