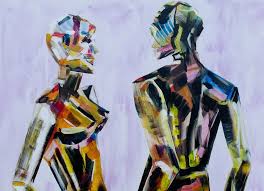 click for essay, “The obsession with creating ‘perfect female robots’: Should women be worried?”

Warning:  this post contains material of a sexual nature that is not appropriate for children and may be objectionable to some adults.

Last night I watched a 45-minute netflix offering about the subject of fembots, called, “My Sex Robot”.

Going to wikipedia, a fembot is defined as, “A gynoid, or fembot, is a female humanoid robot. Gynoids appear widely in science fiction film and art. As more realistic humanoid robot design becomes technologically possible, they are also emerging in real-life robot design.”

The short documentary focused on a couple of inventors working on creating marketable fembots, where their target consumers are those with fembot fetishes. The rest of the show featured two fembot fetishists and one man whose girlfriend willingly was hypnotized into going into fembot mode in the bedroom.

Besides feeling like I’d dropped into a Blue Twilight Zone, it was fascinating to see how fervently the inventors are to get these fembots up and running, or would that be down and humping. It was also fascinating to see how far away they are from designing anything that can remotely duplicate the wondrous real life human body. One of the inventors estimated he’s spent half a million dollars so far!

Just as complicated are the reasons which led the three men featured to seek the company of something other than a compatible human companion. One of the men had been severely bullied as a kid in his rough neighborhood because he looked different than everyone else in his hood. He turned to science fiction stories pre-puberty for escapism, then it developed into a fetish as he became an adult. One of the men had recently been left by his female partner and was extremely reluctant to get hurt again. The third man, the one whose girlfriend gets hypnotized, developed his fetish and wasn’t looking for a fembot necessarily but wanted to have his girlfriend roleplay one.

Although their reasons varied in how the fembot fetish developed, one thing was consistent across all three of them. They were all interested in having sex with a partner with a vacant, robotic look in their eyes, who never said no to anything, and who responded to them in a way that was between docile and being in a coma.

I’d be very interested in hearing any thoughts about any of this.  To me, it’s a disturbing, but inevitable symptom of our deteriorating human condition in the technological age.

word of the day challenge — docile