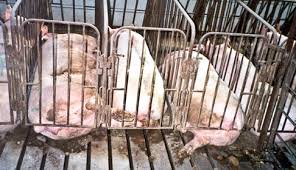 You know those nights you find yourself in the middle of a dream that you can’t wake up from and have no control over? I found myself in one and it is by the grace of God that my story is reaching your eyes.

I was with my friends, Irma and Myra, walking to the diner at the intersection of Main and First Streets for a late breakfast. We sat in a booth near the swinging doors that led back to the kitchen. A waitress wearing a yellowed uniform that fell mid-calf, nursing shoes, and a 5 o’clock shadow walked up to our table with a pot of coffee in one hand and asked in a background voice, “What’ll you ladies have?” We all flipped over our cups and I said, “I’ll have a mushroom omelet and a side of ham.”

All of a sudden there was an ear-splitting crash of pans clattering to the ground in the kitchen and a large, as in 6 feet tall and 3 feet wide, white pig wearing a greasy apron flung the swinging doors open and roared,

“OK which one of you is the ballerina who called me ham?!?! I’m interested to know who is getting knocked to the bottom of the animal kingdom hierarchy!”

Fear gripped me by the throat, but I managed to squeak out, “Me?”

Opening his enormous mouth, which showed large yellowing tusks in both his upper and lower jaws, he laughed an unpleasant laugh. “It’s showtime!” he yelled as his tusk latched onto my arm and he pulled me towards the kitchen. As it was a dream there was no pain as I looked down and saw blood dripping.

I struggled but it was no use. He had me tight. He was dragging me towards an enormous frying pan that was sizzling with what looked like bacon, but I knew it couldn’t be from a pig.

I was able to wake up at that point. I realized in a hurry I wasn’t in my bed. It took me a moment to realize I was naked, filthy, and lying in straw in a very narrow pen, confined on all sides with sturdy metal bars. To my right and left, for as far as I could see, were rows of the enclosures — full of humans. I heard a chilling bellowing towards the end of the building, with the same voice I had just wakened from in my nightmare. As the large white pig, now wearing a bloody slaughterhouse apron, stopped outside of my enclosure he yelled, “It’s showtime!”

Fandango’s FOWC is advocate, the Word of the Day Challenge is hierarchy, and Paula’s 3 Things Challenge words  are ham, ballerina, interest