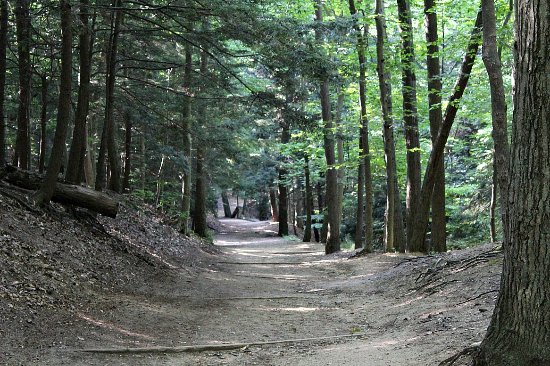 Gordon Lightfoot sang about the “gales of November,” which haven’t quite reached here yet, but cold October rains did their best to wash the rainbow leaves off of the trees. A thick mat greeted my running shoes as I walked along the trail that ran between the dunes today.

I’d almost made it to the lake when there was a heavy thunderstorm.  The usual sizzle on the pavement outside my house when it rains was muffled as the drops thudded flat into the sugar sand. I could hear the roar of the surf in the distance though, growing louder with each step.

As if an arctic blast had lost its way and found itself in the Great Lakes region, the wind snorted like an angry bull elephant that had been given the electric hook one too many times. Looking up the younger saplings were whipping back and forth in a mad hula. Cold wind and hot dancing joined as the snap of a oak limb was followed by mighty rustling as gravity pulled it down its vertical gauntlet. It stopped short of the sand, caught between the fork of another mother oak.

Finding refuge in a hollowed center of a beech that was lodged precariously on a dirt overhang looking over the beast churning waves that had gulls also seeking respite, I huddled up under my coat until the pelting drops subsided, then made it back to my car. Every square inch of my clothing was drenched, so they were peeled off first. A hot bath was the only thing that made my chattering teeth stop.

As I soaked in a lavender scented bubble bath, the storm kicked back up. The gusts slammed again and again at the side of the house, rattling my windowpanes. Knowing how many pieces of the old willow in the front yard had fallen over the past few months, I prayed another one would not fall on the power lines.

Candles and flashlights within reach for the remainder of the evening, I sipped hot cocoa with Baileys and binge-watched old episodes of “Northern Exposure.” I like to complain about the cold weather, but you know getting up close and personal with Mother Nature in her worst moods is always a challenge that gives a sense of satisfaction of having survived – once you’re inside, cozy warm, and sipping hot cocoa.

The following video goes for 10 hours, but it doesn’t take long to experience the sounds of a thunderstorm in the woods.

Sarah is the host of Mindlovemisery’s Menagerie’s Saturday Mix.  Sarah says:
This week we are diving into the depths of PERSONIFICATION. Our challenge is all about the use of personification in our writing. You will need to use the statement provided in your response – which can be poetry or prose.  Our statement using, personification is:
– There was a heavy thunderstorm, the wind snorted outside, rattling my windowpanes.