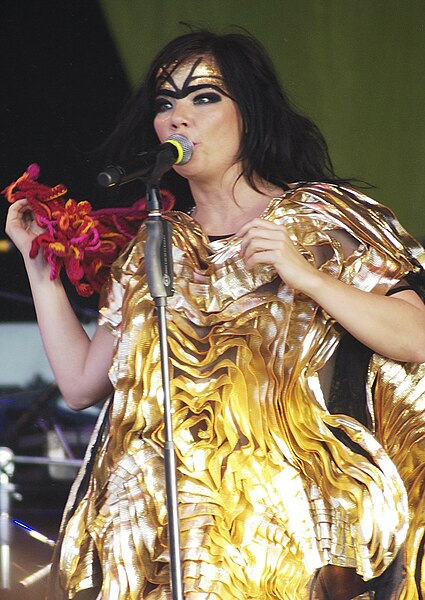 Björk Guðmundsdóttir OTF (born 21 November 1965) is an Icelandic singer, songwriter, record producer, actress, and DJ. Over her four-decade career, she has developed an eclectic musical style that draws on a range of influences and genres spanning electronic, pop, experimental, trip hop, classical, and avant-garde music.

Born and raised in Reykjavík, Björk began her music career at the age of 11 and first gained international recognition as the lead singer of the alternative rock band the Sugarcubes, whose 1987 single “Birthday” was a hit on UK and US indie stations and a favorite among music critics. After the band’s 1992 breakup, Björk embarked on a solo career … while collaborating with a range of artists and exploring a variety of multimedia projects.

Several of Björk’s albums have reached the top 20 on the US Billboard 200 chart and she is reported to have sold between 20 and 40 million records worldwide as of 2015. She has had 31 singles reach the top 40 on pop charts around the world, with 22 top 40 hits in the UK, including the top 10 singles “It’s Oh So Quiet”, “Army of Me”, and “Hyperballad”, and the top 20 singles “Play Dead”, “Big Time Sensuality”, and “Violently Happy”. Her accolades and awards include the Order of the Falcon, five BRIT Awards, and 15 Grammy nominations. In 2015, she was included in Time’s list of the 100 most influential people in the world. Björk was ranked number 60 and number 81 in Rolling Stone’s 100 greatest singers and songwriters lists, respectively.

Other things to share:
In addition to her music career, Björk starred in the 2000 Lars von Trier film Dancer in the Dark, for which she won the Best Actress Award at the 2000 Cannes Film Festival, and was nominated for Academy Award for Best Original Song for “I’ve Seen It All”. Biophilia was marketed as an interactive app album with its own education program. Björk has also been an advocate for environmental causes in her home country Iceland. A full-scale retrospective exhibition dedicated to Björk was held at the New York Museum of Modern Art in 2015.