The three “books” I read are in a slim volume titled, Three Legends, by Paul Gallico and includes: “The Snow Goose,” “The Small Miracle,” and “Ludmila.” All three have been published as separate books, but each of them qualify as either a short story or a novella. With the volume I read, published by Doubleday & Company, Inc., Garden City, NY, in 1966, with delightful illustrations by Reisie Lonette, comes a twelve-page introduction by Mr. Gallico. “The Snow Goose” original copyright was in 1940, “The Small Miracle” in 1950, and “Ludmila” in 1959.

The inside jacket quotes Mr. Gallico in saying,

Each has an animal as a central figure: a cow, a donkey, and a bird…They came into being because of an affection for all animals but in particular for a people, a Saint, and a country.

In the introduction he goes into how each story came to be and shows the parallels between each story as well as detailing how each had its own unique genesis.

The Snow Goose
“The Snow Goose” first introduces Philip Rhayader, the main human character, a misshapen oddity, a castoff from mainstream society, who chooses to move into an abandoned lighthouse in Great Britain in the “late spring of 1930” in order to paint the many birds and lovely landscapes in the vicinity. One thing leads to another, and soon he is cultivating a bird sanctuary. He’s a lonely man who finds contentment in his art. Although he’s not part of the village he lives near where he goes to buy his supplies, he is accepted in his niche on the outskirts of town. Things change when Fritha, a small girl, shows up at his door with an injured snow goose. Without giving away too much of the plot, the man and the goose are involved in saving soldiers who are stranded at Dunkirk in World War II. 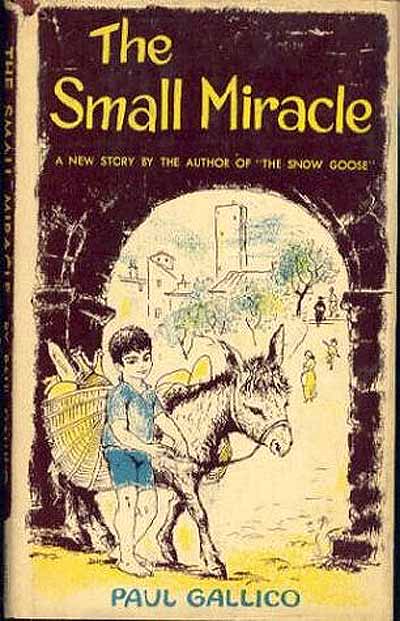 The Small Miracle
“The Small Miracle” takes place in Assisi, Italy, where Pepino, a small orphaned boy, considers himself blessed because when his family dies he inherits the small, smiling donkey, Violetta. Pepino loves and cherishes Violetta and appreciates the reality that they make a good team in their small village in earning enough money to have a place to stay and food to eat. Trouble shows up when Violetta becomes ill. Pepino has the biggest challenge of his life since his parents’ passing when he needs to find a way to save his beloved Violetta. 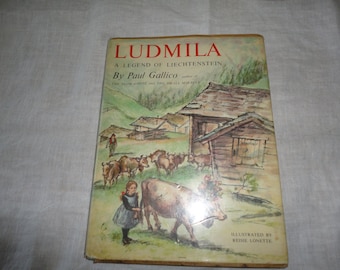 Ludmila
Where the first two are closer to short stories, “Ludmila” is closer to a novella. There are more characters and the characters are better-developed in it. Set in Liechtenstein, the first part of the story talks about the tradition of some families taking cows up in the mountain pastures for months, living in seasonal structures, and milking the cows and making cheese on-site. When the weather cools, the people and the cows return. The villagers who did not go are waiting in their best outfits to welcome them home. The best producing cow of the herd leads the returning procession. One of the cows in the herd, nicknamed “The Weakling,” produces little-to-no milk and has a weak frame. Alois, the head of the pasture group, talks with Father Polda, who makes a nightly walk up to the encampment from the village, and says “The Weakling” needs to be taken to the knacker as she’s good for nothing. Over the months, during their nightly conversations, Father Polda works on the heart of the gruff Alois, who begins to soften and enlists the help of Ludmila, his seven year-old daughter, to keep an eye on “The Weakling” when the rest of the herd is led up to the high ground to graze.

With each of these stories, I ended up blubbering like a little baby. There is a piercing spirituality in each of them. Gallico took bits and pieces of fairy tales, religious icons, and actual history and wove magic around them. The charming illustrations make them that much better. You could probably read all three on one afternoon or evening if you set aside some time. I highly urge you do to so. Your heart will thank you for it.