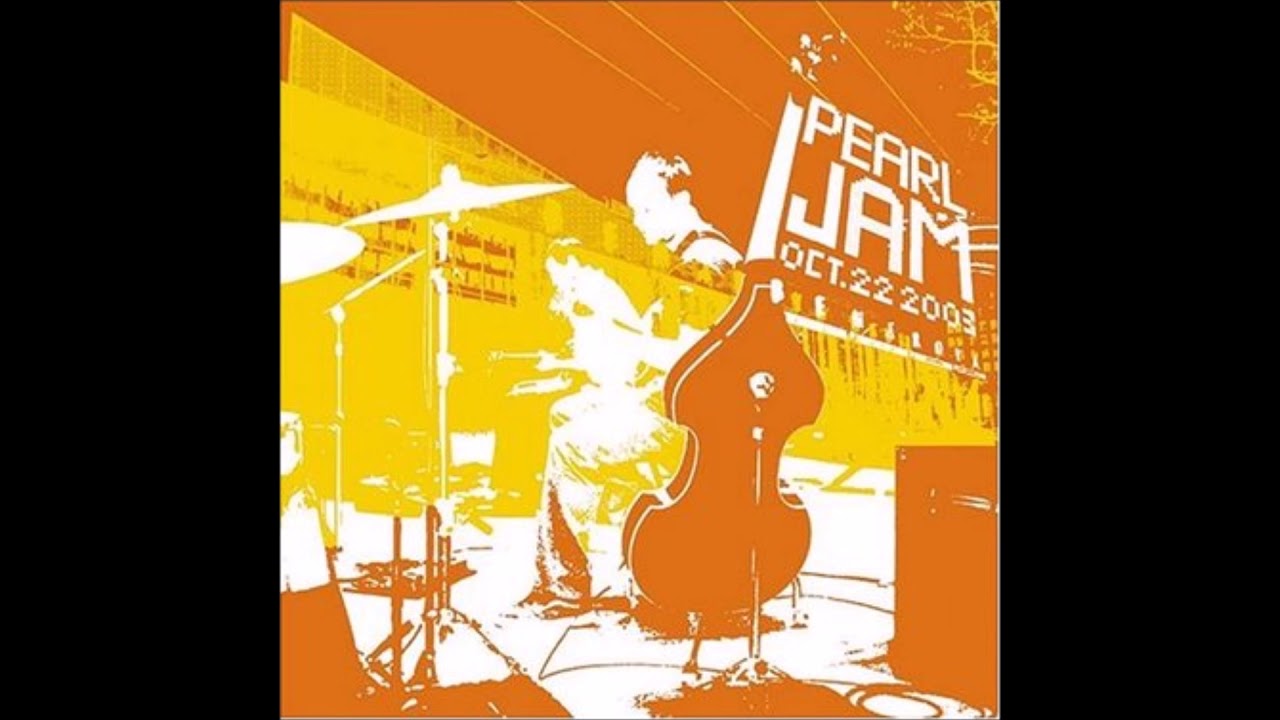 album cover for Live at Benaroya Hall by Pearl Jam

The moment Dave named the topic of live albums, I knew that I wanted it to be one of Pearl Jam’s, but I wasn’t sure which one to choose. Probably my most favorite one is Live at the Gorge, a “seven CD box set that documents the band’s three performances at the Gorge amphitheater in George, WA in September, 2005 and July, 2006,” but that one seemed a little too ambitious to write up, so instead today’s essay will be about the two-disk, Live at Benaroya Hall. The benefit concert was done on October 22, 2003, to raise funds for youthcare, an organization to end youth homelessness in Seattle, Washington. What makes me love PJ’s live albums are Eddy’s comments between songs. He’s a preacher in his own way and his flock are adoring of his pronouncements.

I decided to put this essay in a format where I will listen to the disks and while doing so write whatever bubbles up during the listen. Notes will be made on Eddy’s comments between songs, as I will also do for audience response. The plan also developed into including what album, if any, each of the songs are on and any orienting tidbits for each of them.  Please note that at the end of the post is a link where you can go to the full concert at youtube.

“Of the Girl”
From the Binaural album, Gossard wrote this one and describes it (elsewhere) as “pretty somber.” And the crowd goes wild. The Jamily is feeling blessed that they are there with the band.

“Low Light”
On the Yield album, this is bass player Jeff Ament’s first lyrics contribution. Listening to a live Pearl Jam album is like going to church. Every member is “on” and tweaking it with the vibe of the audience. I love the sound of the wood resonating in the rhythm guitar. Now here comes McCready with his soul-driven flourishes. Eddy’s singing like the benevolent God that he is. There truly is nothing other than the now of the music.

“Thumbing My Way”
From Riot Act. “I love you, Eddy!” someone shouts from the audience. Too many hoots and cheers to count. This song is an anthem for every traveler going through this world.

“Thin Air”
On the Binaural album. There is something about “Thin Air” that is deceptively simple yet deep and profound. The wordplay and the delicate manifestation of the melody brings tears to my eyes every time. One of the most magical things about live music is that you’ve got thousands of listeners communing with the band at the same time. “taken on on on on” crooned by Eddy urges an almost orgasmic experience. Multiply that by so many supercharged people in the audience and the energy of resonance has got to be off the charts. For those of us listening to a recording at home, we are aural voyeurs that feel it less intensely but are still satisfied. Where’s my cigarette?

Eddy comments about hearing beforehand about the good acoustics of the venue (Benaroya Hall) and talks about his mistake on Thin Air. He introduces a new song, “Fatal,” that is coming out soon on, Lost Dogs, which is a collection of b-sides.

“Fatal”
Written by Gossard. From the Lost Dogs album. Previously unreleased and was an out-take from the Binaural album. Lost Dogs is an often-overlooked album, and it shouldn’t be. It’s one I’ve listened to just as much as any of the others. There is more of a potpourri aspect to it than any conceptual thread, but that’s ok. It’s like walking around an amusement park.

Some loudmouth in the crowd is screaming unintelligibly. There is one in every crowd.

“Nothing as it Seems”
Written by Ament, from the Binaural album. Rocking sweet McCready solos. Those long, lonely notes. Many audience members are howling and screaming.

Eddy says that Tim Burton sent “Big Fish” to PJ and asked them to write an ending song for it. They had just recorded it a few days before; they asked Tim if it was OK if they performed it at the show and he was ok with it. The song? “Man of the Hour.”

“Immortality”
On Vitalogy. Rhythm guitar jamming out. Bass prominent. Eddy waffles on whether or not this song was about Kurt Cobain (but not at this concert.)

“Around the Bend”
From No Code. Such a sweet serenade! Written by former drummer, Jack Irons, as a lullaby for his son.

Eddy says that one of ushers notified him that someone wanted to talk with him. The person verified he was Eddy and then the man tried to serve Eddy legal papers. Eddy comments that it was, “the most punk ass mother fuckin’ move I ever heard of.”

“I Believe in Miracles” (This is a Ramones cover.)
Appears on the 2003 Annual Vinyl Single. How this bridge starts and goes sends me into orbit: I close my eyes and think how it might be. I can’t tell you the number of times this one has done an earworm on me.

“Sleight of Hand”
From Binaural. Existentialism is best not dwelled upon too long. McCready uses his wah wah pedal. The acoustics in Benaroya Hall are excellent.

“All or None”
From Riot Act. It’s open to interpretation. (Extremes are to be avoided in my experience.)

“Lukin”
From No Code. Stone Gossard introduces the song. The song is short, sweet, and damned intense. It’s about when a woman was stalking Eddy to the point that he was avoiding his own home. Also it is reported that it’s short and sweet because someone criticized PJ’s songs as being too long. Funk dat!

“Parting Ways”
From Binaural. Looking through some comments on websites about this one, there are interesting theories but the consensus seems to be this was about the imminent breakup between Eddy and Beth.

Eddy gives a Public Service Announcement (PSA): 60,000 young adults have been helped through youthcare. Eddy asks for a round of applause for the staff and the kids involved with the organization, and then to the audience for supporting them.

“Down”
On the Lost Dogs album, written by Gossard, McCready, and Vedder. Originally on the, I Am Mine single. An up-tempo song with a line that is also the title of a Howard Zinn book, “You can’t be neutral on a moving train.”

“Can’t Keep”
From Riot Act. Eddie on ukelele, singing about going to “the other side,” and the refrain is, “you can’t keep me here.” There is a definitely mystical aspect to this song.

“Dead Man”
Included on the “Lost Dogs” album. Originally from the “Off He Goes” single. Originally intended for the Dead Man Walking soundtrack, but passed over in favor of Bruce Springsteen’s “Dead Man Walkin.” (Wrong choice, in my opinion.)

“Masters of War”
Written by Bob Dylan, I wish I could say this song is obsolete. It feels ever-fresh with new blood being spilled. Why young people continue to choose to die to serve their world chess playing masters is one of the great mysteries of our species.

“Black”
This may be the best known Pearl Jam tune. It’s unquestioningly one of their signature tunes. The poetry of the lyrics, the way Eddy sings it, and knowing he poured his all into it, trying to get over the one love of his life. Many times he sings with every drop of raw emotion. This time he sings as if the sting of anguish has subsided and it’s more in retrospect. Eddy invites the audience to sing along and it gives me the goosebumps to hear it sung in unison with Mike’s accompanying soulful guitar.

“Crazy Mary”
One of my personal favorites. Surprisingly not written by PJ but by Victoria Williams. If you can listen to this song and not feel at least a little compassion for Crazy Mary, you have no heart. I also like the mystical aspect to this one. I wrote a poem in honor of Crazy Mary a few years ago. You can read it here.

“25 Minutes to Go”
Johnny Cash wrote this one. It’s about a guy facing capital punishment by hanging. Eddy does it up right with some real nice flourishes by McCready on guitar.

“Daughter” A quote from Eddy about it:

“The child in that song obviously has a learning difficulty, and it’s only in the last few years that they’ve actually been able to diagnose these learning disabilities, that before were looked at as misbehavior; as just outright rebelliousness, but no one knew what it was. These kids, because they seemed unable or reluctant to learn, they’d end up getting the shit beaten outta them. The song ends, you know, with this idea of the shades going down—so that the neighbors can’t see what happens next. What hurts about shit like that is that it ends up defining people’s lives. They have to live with that abuse for the rest of their lives. Good, creative people are just fucking destroyed.” – from Jones, Allan. Pearl Jam – The Illustrated Story, A Melody Maker Book. Hal Leonard Corp, 1995.

“Yellow Ledbetter”
Another song of theirs that got a lot of radio play. About a guy whose brother who has gone off to fight in war and the guy hopes he doesn’t come back in a box or a body bag. The guy gets a letter saying his brother has been killed.

OK, there you have it, a template for how I grok live albums, or at least how I grok live Pearl Jam albums. The musicianship is superior, they sound just as good live as they do on their sanitary studio versions, and you just never know what Eddy is going to say.

Thank you for the prompt, Dave. I enjoyed writing this very much.

I was going to link each song separately, but I found the whole concert out on youtube. There is a track listing where you can click to each song, which is always helpful.  Oops it doesn’t show up here, but you can watch it on youtube without a problem.

This post was first published at Dave’s blog, A Sound Day.